Wow. What a year it has been. It’s as if I am back in the good graces of the angels.

I can’t fathom what I must have done to deserve this. This year felt like remembering.

All that I have been, all that counted – all that I am; everything that matters in my heart has crystallized, and I feel better than I have in a long time.

Consider the preceding paragraph a compressed version of events. The ultimate outcome however, having been that I underwent a kind of rare quantum change that only occurs once or twice in a lifetime – if at all. My chrysalis – a great unscrambling of an egg, consciousness untangling itself, brand new neural networks – biodigital jazz. Like putting my soul in a cosmic rock tumblr: in goes a Jackson Pollack, out comes a Monet. From Tom Odell’s Another Love, to Ed Sheeran’s Kiss Me – angst to romance – I fell back in love with life and my heart grew.

I can’t elucidate beyond those three words, because no other metaphor can do it justice. So here I sit, big eyed and dumb, knowing that numb is the new deep.

And it’s blissful, but I’m frightened.

It’s the fright of discovering that seemingly eternal island of inner peace within yourself but fearing the tide might rise and you’ll find yourself underwater again.

You see, I’ve never said I’d never go back there – but now I’m ready to look back and declare that I’ve been to a place I don’t ever wish to return to. I’m still scared because I am still scarred. But I’m following my intuition now, something I haven’t consciously – or rather, something I haven’t bravely done for about four years. That hurts to admit, but it’s true – I spent about four years brooding – complex and angry and all alone, even when I wasn’t. It was a hell of a cave. Deep and dark as fuck.

So tonight I’m writing because I am scared of my intuition letting me down. That’s probably my deepest fear. I don’t ever want to go back there – to that magicless place – zemblanity. Total fucking suffering, unbelievable mediocrity.

Despite the fear, I am reminding myself, my intuition has never been wrong. Of course, there are times where I have made errors in judgement (also known as lessons learned), but as far as relying purely on intuition, I can’t ever recall an outcome that wasn’t opaquely intuited beforehand – that’s why it’s called intuition.

You see my dear reader, life is really like one of those choose your own adventure books. Follow your intuition and you can’t go wrong. Follow fear, and doubt, and all things unholy and you will end up fighting giants, playing the game of life on hard mode. But, unlike in the choose your own adventure books where you can take a mulligan on a bad shot, in real life, you don’t get to turn back the pages and do things differently. There is no second time around. Gatsby was wrong. So, you either learn to write the story of your life with great care – with a conscious awareness and an attention to the process, or you simply never wake up, never realizing that this is your story.

And I have awoken, I know this is my story. Infinite possibility. So that’s what I’m doing, I’m trusting the process, learning to sail it one horizon’s tack at a time.

I’m trusting that a fresh dawn will follow the darkest nights and this is a self-fulfilling prophecy. My thoughts and attachments are no more than clouds in this sky, and the squalls come and go, but the sun shines eternal behind it all. It’s a beautiful thing to trust in the power of a new day, because when you really do, you realize that each moment is a new dawn. As is said in one of my favorite movies – “Every passing minute is another chance to turn it all around”.

But I never saw the ‘transformation’ (for lack of a better word) that would come of it. I had hoped for a comeback of sorts, and I held fast to the belief that things would one day be better, but I eventually forgot what hoping felt like. And as forgetting goes – I didn’t know that I had forgotten, I just eventually ended up holding onto a semblance of ambition, a thread of destiny hanging before me. I clung to it without knowing what lie on the other end of this thread, I just … well – frankly, I don’t even wish to recall what it was like. (I’ve spent months pushing out the kind of existential diarrhea that only befalls writers and creatives.) Let’s just say I didn’t see the man I could be. I didn’t see myself capable of transcending what felt like all of existence.

But I did; I came out of the storm a changed man. Not a different person – just different, more true to who I am. Vastly more aware of what that is.

“Once the storm is over you won’t remember how you made it through, how you managed to survive. You won’t even be sure, in fact, whether the storm is really over. But one thing is certain. When you come out of the storm you won’t be the same person who walked in. That’s what this storm’s all about.” – Haruki Murakami

The storm is a humbling yet empowering experience. I just wish I could have said to myself at the time, Don’t worry man, you’ll make it out of this, but I can’t tell you how many times I just closed my eyes and imagined going deep underwater to a place that felt separate from my experience.  That kind of attempt to escape presence – there are no words for what that is. It’s what I did though. I closed my eyes and imagined going deep into a blue underwater cave. Perhaps a kind of waking dream of sorts – going beneath the surface to escape the storm. Whatever it was, it was all I could do at times to be with myself.

But now I am here. 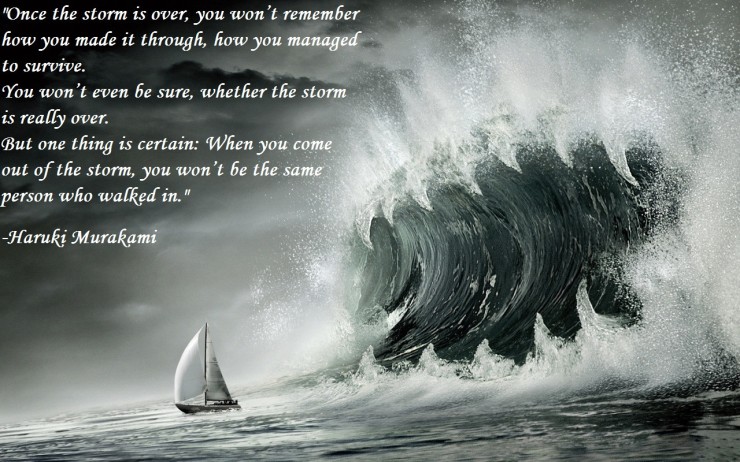 I’ll let the beautiful poetry of Seinabo Sey close me out.

There’s a conclusion to my illusion
I assure you this
There’s no end to this confusion if you let it wish you well
-Soul to sell
Highest bidders, can’t you tell what you’re getting?
There is a light to all this darkness, I will tell you this
There’s redemption in you asking them just why it is
Some answers are better left unspoken when you know you ain’t getting any younger

One thought on “The Storm”